Beijing Jiaotong University is a national key university under the direct administration of the Ministry of Education and jointly supported by the Ministry of Education, the China Railway Corporation, and Beijing Municipal Government. Beijing Jiaotong University is one of the first universities selected into the “National 211 Project” and the “985 Strength Discipline Innovation Platform” project, and also one of the first institutions authorized to confer masters and doctoral degrees. BJTU, as the leading organization, has established the Collaborative Innovation Centre for Rail Transit Safety, which is one of the first 14 collaborative centers approved by the Chinese government to enter the “National 2011 Projects”. BJTU has been selected into the top 100 of the “QS BRIC five countries” for 3 consecutive years, 6 disciplines have entered the top 400 of the QS World University.

BJTU grew out of Beijing Railway Management Institute, China’s first higher educational institution which was committed to fostering railway management talents and initiated modern China’s education in railway management and telecommunication. In 1917, it was reorganized into Beijing Railway Management School and Beijing Post and Telecommunication School. In 1921, it merged with the Shanghai Industrial College, Tangshan Industrial College to form Jiaotong University. After the reorganization of Jiaotong University in 1923, the Beijing campus was renamed Beijing Jiaotong University. In 1950, the school was named Northern Jiaotong University, and the president was the famous bridge expert Mao Yisheng. In 1952, the Northern Jiaotong University was revoked, therefore, the Beijing and Tang campus became independent and the school was renamed Beijing Railway Institute. In 1970, the name Northern Jiaotong University was resumed. In 2000, it had merged with the Beijing Electric Power College and the administration was transferred from the Ministry of Railways to the Ministry of Education. In 2003, the name Beijing Jiaotong University was resumed. Some renowned people in Chinese history received education at the University, including Liu Han, founder of China’s first radio station, Ying Shangcai, inventor of China’s first high-power steam engine, Zheng Zhenduo, famous writer and literary critic and historian, Jin Shixuan, author of China’s first railway management monograph, Xu Jing, pioneer of railway transport economics in China, and Yang Rumei, one of the early four major accountants in China. Some famous scholars worked at the University, including Xiang Zhejun, Chief Prosecutor of the Tokyo Trial and Ma Yinchu, a famous demographer and economist.

BJTU is located in Beijing, the capital city of China with east and west campuses in Haidian District. It covers a total area of almost 1,000 mu (1 mu approximately equals 667 square meters), and its building area is 910 thousand square meters. The university has also established a new Weihai campus and put it into use in 2015. Each campus has sound teaching and research facilities as well as a beautiful environment.

BJTU has regarded the improvement of teachers’ quality as the top priority of running a university and it has vigorously implemented the strategy of strengthening the school talents. Till now, BJTU has 2,907 faculty and staff members including 1,846 full-time teachers. (Among the full-time teaching staff, 1,199 are deputy senior professional and technical positions and 1733 are master’s degree or above.) BJTU has 2 academicians of CAS, 2 academicians of Chinese Academy of Engineering , 5 national teachers, 6 members of academic evaluation group of the Academic Degrees Committee of the State Council, 4 “973” chief scientists, 9 selected person of “Thousand Talents program”, 6 selected person of “ Ten Thousand Talents program”, 8 distinguished professors and part-time professors of “Yangtze River scholar”, 11 National candidates of Talents Project, 9 winners of national outstanding youth fund, 11 winners of outstanding youth fund, 69 person of the program for New Century Excellent Talents project, 158 experts who enjoy special government allowance.

Today, with 120 years of glorious history, Beijing Jiaotong University carries on its mission, following the motto of “Learn and Practice” and the spirit of modesty, caution and innovation, remembering the demand and expectations of the former national leaders, and striving towards the goal of building a world-renowned university with high-level distinction.

Beijing, the capital of China, is an ancient city with a long history. Back in 3000 years ago in Zhou dynasty, Beijing, which was called Ji at the moment, had been named the capital of Yan. Thereafter, Liao, Jin, Yuan, Ming and Qing dynasty all made Beijing their capital. Therefore, Beijing was famous for “Capital of a thousand years”.

The long history leaves Beijing precious cultural treasure. Winding for several kilometers in Beijing area, the Great Wall is the only man-made structure that could be seen in the space. The Summer Palace is a classic composition of ancient royal gardens, and the Forbidden City is the largest royal palaces in the world. Tiantan is where the emperor used to fete their ancestors, and also the soul of Chinese ancient constructions. The four sites above have been confirmed world cultural heritage by UNESCO. However, the best representatives for Beijing are the vanishing Hutongs and square courtyards. Through hundreds of years, they have become a symbol of Beijing’s life. Tian’anmen square being still brilliant today with cloverleaf junctions and skyscrapers everywhere, the old-timey scene and modern culture are combined to present a brand new visage of Beijing.

BJTU Library boasts abundant resources, featuring works of literature on rail transport while focusing on engineering, management, economics, science, literature, law, philosophy and other disciplines. It owns a total of over 4.51 million books, including over 1.62 million paper books, 0.35 million e-books and other electronic resources, and about 2.49 million copies of network resources. It has more than 140 Chinese and foreign databases including CNKI, Wanfang, SCI and EI, 21,000 online full-text electronic journals, over 1.93 million academic theses and dissertations, and over 77,000 copies of conference papers, full-text regulations, and standards in Chinese and foreign languages, which can meet the all-around needs of students.

BJTU stadium is a two-floor building. On the first floor are rooms for various sports, and on the second floor are standard indoor stadiums. There are gyms, table tennis rooms and shuffleboard rooms on the first floor where taekwondo, yoga, hip-hop, ballet physical training and other fitness training courses are also offered all year round. Badminton, basketball, volleyball and other sports can be played on the second floor. Stadium facilities are accessible to students except for the time for physical education or training. 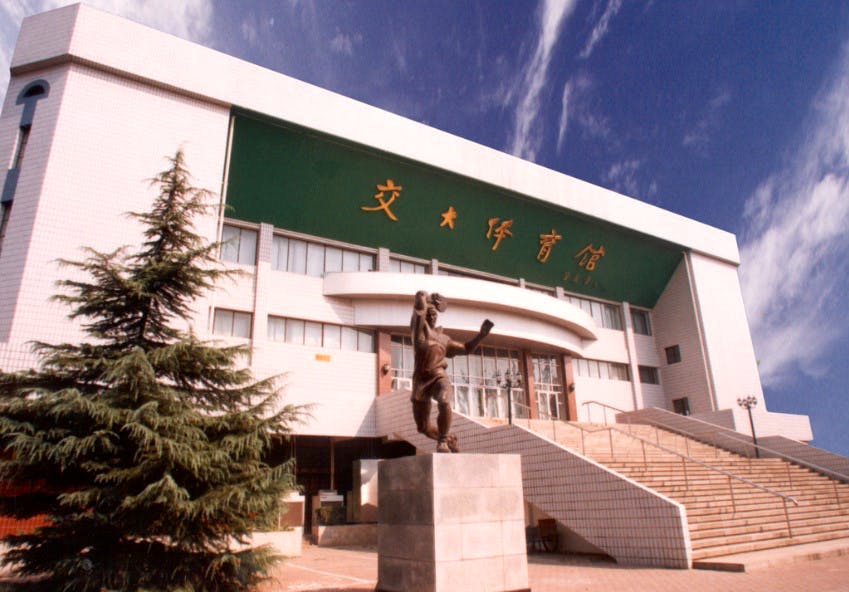 The swimming pool covers about 5,000 square meters with a usable area of about 4000 square meters. It has 50-meter standard lanes and consists of shallow and deep water pools which can be used for physical education and swimming competitions respectively. This is also a good place for physical exercise and summer heat avoidance.

Ming Lake is an artificial lake surrounded by weeping willows and adjoining the library. You can study here in the morning or chat with friends. Ming Lake can offer you a harbor to relax. 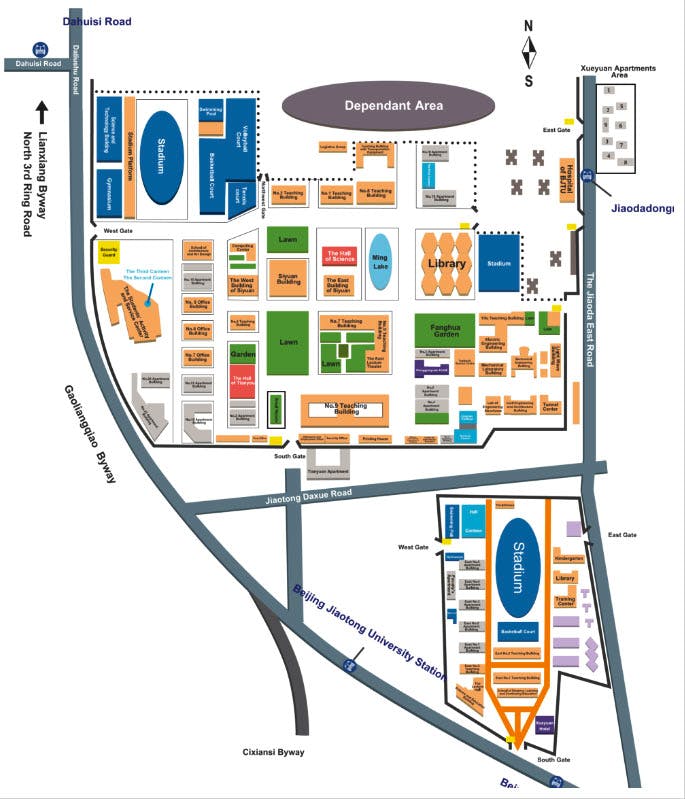 Beijing Jiaotong University offers rich extracurricular activities. Students are presented with a wide array of clubs and communities where they have a chance to meet new people, gather new information, and even try something they have never tried before.

Students Art Troupe – Formally established on June 22, 1991, BJTU Students Art Troupe is the student arts organization under the leadership of BJTU Youth League Committee. The Troupe consists of a symphony orchestra, symphonic band, Chinese orchestra, choir, dance troupe, play troupe, marching band, film group and drama club, with more than 600 members covering undergraduate, graduate and international students. Each of these 9 troupes has full-time instructors from the university, and a number of renowned artists at home and abroad are also invited for professional guidance.

Sports – The annual sports game in May is one of the most anticipated events for BJTU students. Athletes on the field and the excited audience form a beautiful scene. The game usually lasts two days, covering up to 147 competitions. The perfect performance of each athlete and the enthusiastic acclaim of the audience explain the greatest charm of this event.

Volunteer Activities – Taking December 5th the International Volunteer Day as an opportunity, BJTU Volunteer Service Group, along with its branches in each school, carries out series of activities in the volunteer month. By holding Beijing University Volunteers Forum, Volunteer Carnival, Smile BJTU-Volunteer Sharing and Exchange Meeting, Graphic Gallery and other activities, it effectively mobilizes and organizes volunteers to show themselves through volunteer services, enables the youth to play an important role in promoting social harmony, and spreads the volunteerism of “dedication, friendship, mutual aid, and progress” for a better understanding of volunteers among teachers and students. It enhances the influence and cohesion of BJTU youth volunteer organizations while contributing to the construction of BJTU campus culture.

Cultural Festivals – During the past years, BJTU has held a cultural festival for five times, covering Asia, Africa, America and Europe. The demonstration of diverse culture has attracted tens of thousands audience and make the campus international. Mutual understanding was improved to a higher level.

I can honestly say that studying abroad was the best decision that I have made during my collegiate career. Now I can share my stories from studying at BJTU, camping out at the Great Wall, and so many other experiences!!
Victor Oluwole, Nigeria